Following Cardiff Council’s announcement of a huge 25 million pound upgrade to its sea defences due to “rising sea levels caused by climate change” concerns, Barry Green Party is calling on the Vale of Glamorgan Council to carry out its own environmental risk assessment to highlight any Barry or Vale communities that may be vulnerable to future sea level rises.
This announcement follows a scientific report showing that communities in Barry (including the new Docks Development, the Bendricks and the Knap) could be at serious threat of sea level flooding within 30 years, and the recent United Nations warning to world Governments that “Its Code Red for humanity!”.
The Cardiff engineering works are likely to begin on-site in February next year and finish by October 2023 with the Welsh Government funding 85 per cent of the works and Cardiff Council funding the rest. 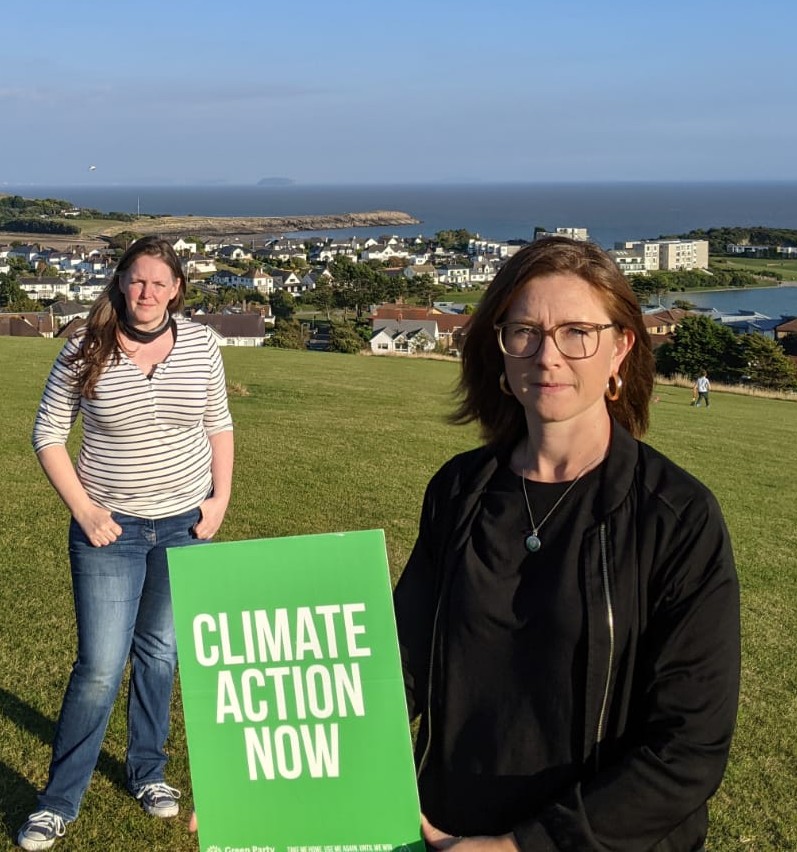 Amy and Aoife with the Knap and the new Barry docks development.

Barry Green Party spokesperson and Barry resident, Aoife Blight, said:
“ We need to listen to the scientific evidence and urgently carry out hydrological surveys to ensure that any Barry and Vale communities have the protection they deserve. It is clear that climate breakdown is exceeding all projections.
I believe that it is only prudent that when Cardiff Council are prepared to move 100,000 tonnes of rock to protect Cardiff communities then the Vale Council should at least inform residents of its plans to protect Barry and Vale communities from future sea level rises.”
Green Party member and Manager of Awesome Wales, a Zero Waste shop, Amy Greenfield added:
“The rising sea levels is mainly due to a combination of meltwater from glaciers, melting ice sheets and thermal expansion of seawater as it warms. Global sea level has been rising over the past century, but the rate has increased in recent decades and is projected to rise even faster, this means that destructive storm surges can push farther inland than they once did."
The Vale of Glamorgan Council must be prepared to update their projections, help strengthen defences and stop giving planning permission on vulnerable sites to ensure people and livelihoods are protected against future sea storm surges .
Green Party members will be supporting the climate breakdown walk being organised by Barry Action for Nature on Saturday 25th of September. We need to lobby our elected representatives at all levels to ensure that they are taking action to slow future sea level rises.”
The Leader of the Green Party in Wales, Anthony Slaughter, also added:
“We are facing a climate emergency exemplified by global temperatures increasing at an increasingly unprecedented rate. The United Nations have warned that this will lead to rising sea levels, ocean acidification and more severe floods, droughts and storms.
The UK was the first country to industrialise and has been a major emitter of greenhouse gases over many decades we therefore bear a particular responsibility to lead in the fight against the climate and ecological emergencies.”